Your Generosity in Action

Planting Hope Among Those in Crisis 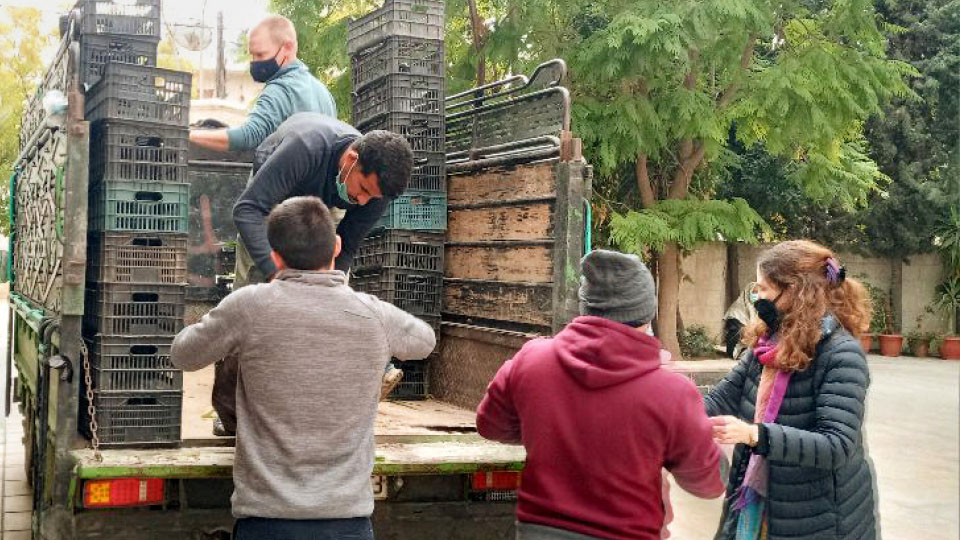 by an Alliance international worker serving in the Middle East

People in the Middle Eastern country where we serve are coming to faith in Jesus Christ. Lives are being restored, miracles are occurring, and God is being glorified. This has been my family’s prayer since our arrival in 2017, joining a century-old Alliance effort to reach the Arab Lands with the gospel. Now God is using unprecedented hardship in this region to bring people to Himself, empowering Alliance workers to join in His redemptive work through the generous support of friends like you.

Jesus says, “You are the light of the world. A city on a hill cannot be hidden” (Matt. 5:14). This statement stands in connection with John 8:12, which is displayed on the rooftop of Alliance buildings in the Arab Lands, يسوع نور العالم (Jesus is the Light of the World). We believe that Jesus has called us to bear witness to His light in dark places. Through prayer and discussion with national partners, we determined a strategic location in our country’s capital city to begin a new church-planting effort. The neighborhood is a transit hub and a central connection point for different communities within the city. The project’s name is City on a Hill.

City on a Hill began as one may expect of a church plant. We started prayer walking our neighborhood daily. Intentionally meeting neighbors and shopkeepers, we built relationships with many residents. Our family engaged in local community activities, spending time with other young parents. We drank more coffee than I could have ever imagined. Slowly, we began having opportunities to share about Jesus.

Everything was going to plan. We regularly hosted families at our house, praying together and discussing Scripture. People from around the area from different backgrounds and faiths were coming together. A highlight for our family was Christmas 2018. We had over 40 people in our apartment, 15 of them children. Together, we celebrated the nativity story and our Savior’s coming.

Looking for a building to rent, we expected an imminent start to a formal church plant. The national church was prayerfully helping to compile a core team. We anticipated solidifying the plant’s foundation the following year, allowing it to continue its steady growth.

In 2019, our country began a breakdown of epic proportions. Already heavily burdened with the largest per-capita refugee rate in the world (1:4), the country saw its currency collapse. As banks froze accounts, our middle-class neighbors became instantly impoverished. Our city turned to violence as people protested government corruption. The streets became unsafe. I will never forget the day armed men accosted our daughter’s bus on her way to school. Fear and uncertainty overtook the feelings of hope and expectation we had been experiencing in our church plant.

By 2020, the city was in freefall. The currency had dropped 90 percent of its value, with the average minimum wage being about $30 per month, making daily life unmanageable. Riots and protests were still ongoing until COVID-19 initiated a martial-law lockdown.

On August 4, an explosion occurred at the local port. It’s hard to describe the magnitude of the blast that ripped through the city. Hundreds died, thousands were injured, and homes for miles around were damaged, including ours. We are grateful the Lord protected our family, bringing us out of the country before that day.

Many of the families with whom we built relationships left the city at that time. Disenfranchised, impoverished, and homeless, they returned to their family’s villages. Our family was disheartened. Our ministry was stalled, and the city appeared hopeless.

God was ready to do a new work.

The Alliance national church immediately began serving many affected by the blast, partnering with Alliance Missions and CAMA Services. Through home repairs, new relationships were established in previously disengaged communities. Through expanded food distribution, physical needs were met, and there is now a clear witness to the love of Jesus Christ through His people. And God is moving.

Since August 2020, a network of over 200 people receiving regular spiritual care has developed. A local pastor engaged in the rebuilding efforts testifies that more than 90 people have prayed to accept Jesus as their Savior. Many of these people are still greatly suffering, but the hope of Jesus is being planted in their hearts. One by one, God is reclaiming this city for His Kingdom.

In every family, there is a story of God’s redemptive work. One woman receiving care had lost her husband in the explosion. She was pregnant. Words cannot describe the pain she was experiencing in the loss of her husband and the father of her unborn child.

I will never forget the day I went to her building after her son was born. She received care, prayer, encouragement, and support from the local pastor. On this day, we went to her home to dedicate her child to God, claiming the grace, love, and mercy of her boy’s Heavenly Father, even in the absence of his biological one.

There is story after story of God’s marvelous work in this country. Many accept faith after receiving dreams and visions. Others are healed—physically, spiritually, and emotionally. Our continued work is possible because of your generous support for Alliance Missions. Thank you for giving!

God is not finished working in this country. He is not done moving in the Arab Lands. While the current crisis persists, we claim “greater is He that is in [us], than he that is in the world” (1 Jn. 4:4, NKJV). Over the last three years, God has proved to me that His ways and plans are greater than mine. Our commitment is to stand firm in the truth of Christ, striving to represent Him among the lost of our city. While methods have changed, our heart remains the same. We will establish a church here to stand as a City on a Hill, a light in the darkness.

For this dream to be fulfilled, we need your persistent prayer. We ask that you remember us, praying at all times in the Spirit, with all prayer and supplication, that words may be given to us to proclaim the mystery of the gospel, for which we are ambassadors (see Ephesians 6:18-19).

MULTIPLY THE CHURCH IN THIS HUB CITY

More than 2.5 million people live in the capital city of this Middle Eastern country, yet less than 1 percent of the population is evangelical Christian. Will you invest in shining the light of Jesus and multiplying a gospel network in this hub city? To bring gospel access to hurting people in this community, click here; select “a project you love/Find a project”; and type in “City on a Hill.”