When God Moves a Mountain 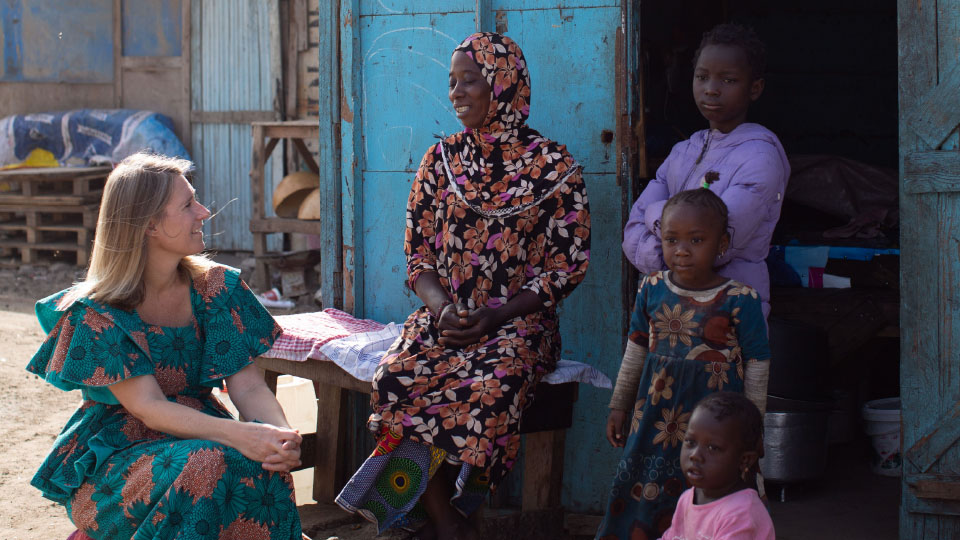 When you hear the word “junkyard,” what comes to mind? Do you think of rusted, abandoned cars? Or an area overflowing with scraps waiting to be discarded and recycled? Would you ever consider a junkyard to be a fit place to lay your head at night? To call home? Probably not, and you wouldn’t want to.

However, in large cities in West Africa, these junkyards, also known as informal settlements, are exactly that—home to hundreds of people who are desperate for a place to live. That desperation leads to almost indescribable vulnerability—learning to live by fastening together pieces of metal, tarps, and wood to make a shelter or a “house,” walking miles to get to the nearest clean water source, digging holes in the ground for restrooms that constantly overflow into the camp, having no privacy, and fearing for safety.

Africa has the fastest rate of urbanization in the world, and as the population increases so does poverty. These slum communities are becoming more and more common in large cities across West Africa, and there are desperate needs among the urban poor. About 60 percent of people in these cities are living below the poverty line, and according to a couple of our international workers serving with CAMA, the people in these communities are some of the most overlooked and unreached in their context.

According to the book Cry of the Urban Poor by Viv Grigg, the urban poor are doubling every decade and are among the most responsive to the gospel, but they are often overlooked. “There’s nobody we know of working with the urban poor,” says Becky, a CAMA worker serving in one of West Africa’s urban centers. “There aren’t any other major organizations that have ministries in these slum communities, yet they are quickly becoming the largest demographic in our cities.”

Despite the vast area these informal settlements cover, if you look out onto a street in these cities, you would never know that people lived in these types of communities—you might never even know that the urban poor exist.

Becky and her husband, Shawn, hadn’t known of the slum communities until a woman invited Becky to her home. Around where Becky and Shawn live, there is a street corner where women frequently beg. One woman in particular, Kumafi, was there every day, and Becky formed a friendship with her. One afternoon, Kumafi asked Becky if she would like to come to her home for a meal, so Becky got the directions, and when her car pulled up, she was certain she was lost.

“All I saw was this huge junkyard with all these pieced together shelters made with tarps and old tins,” Becky remembers. “But Kumafi was standing there waving me in, and I realized that this is where she lived—in this informal settlement right in the middle of the junkyard.”

Kumafi immediately showed Becky such beautiful hospitality, welcomed her with food and generosity, and gave her the seat of honor, a bucket flipped upside down.

“I was just shocked. I had no idea people lived in these conditions,” Becky says. “There’s no sanitation. There’s no clean water. There’s no shelter, really. God broke my heart at the injustice that Kumafi lived in these types of conditions with her three children. The Lord spurred in our hearts to do something about it, just to act on what we had seen.”

The CAMA team immediately felt called to action and were incredibly passionate about breaking the cycles of poverty and seeing a church established in the community in order to partner with them so they can one day become self-sufficient and meet their own needs.

After Becky’s initial visit in the settlement, she started going back to meet with the women there, developing relationships alongside her CAMA team. Soon after they began their frequent visits, the CAMA team was led to meet the community leaders in order to talk about ways to come alongside them in promoting change.

They were introduced to the village chief, a devout believer in the predominant religion, but a man incredibly open to spiritual conversations, a man filled with peace. The CAMA team developed a beautiful partnership with the chief that has been instrumental in coming alongside the community and learning about their needs.

When the team met the chief for the first time, he wanted to organize a “sit down” right away to discuss the needs of the village. What they thought would be a low-key event turned into a discussion with almost the entire community.

“We were working with our local partners, and when we showed up, the chief had set up tents and chairs and had invited pretty much the whole community to be part of that conversation,” Shawn remembers. “And it was good. We listened, and they identified ‘health’ as one of their main concerns and one of the bigger needs. We then started talking about solutions, which led us to the nutrition program.”

Food security is a significant issue within these communities—they just don’t have enough food. The team partnered with their Alliance World Fellowship family, CAMA colleagues, doctors, and local believers to facilitate a nutrition program to teach about health and provide food.

Within six months, all of the children who had been identified as malnourished reached their target weights. They didn’t have a need to continue the program, so once again, they met with the community leaders to inquire about other needs.

The team desires to glorify God not only in how they are helping the community but also in how they go about helping through communication. It is so important to them to ask the people in need to identify their needs instead of assuming. Such humility and grace shown to the community provided them deeper relationships with the local leaders and with the community as a whole.

Breaking the Cycles of Poverty

After the successful nutrition program, the community identified “education” as another significant need. In this West African country, there is an incredibly high rate of children who drop out of school—42 percent of students fail the test that they have to pass in order to go to junior high and high school.

It is almost impossible for students coming from low economic communities to pass the test, so they inevitably can’t continue their education. Most cannot afford a tutor or private schooling, so many students in the community are not educated past the fifth grade. This was a significant problem in the community; and because of that, Seeds of Hope was born.

Two afternoons a week, the CAMA team, alongside local believers, gathers students who are within two years of taking their government exam and provides low-cost tutoring. It was an obvious next step, and the results from Seeds of Hope go way beyond the classroom.

“Education is the number one indicator for breaking the cycle of poverty,” says Becky. “We do really want them to pass their exams. It’s not just an ‘in’ into this community. Yes, we’re getting to know them on a deeper level, but we genuinely care that the children pass these tests and move on to higher education because we know it’s going to break cycles of poverty.”

Last year, 24 out of the 27 students who were involved in Seeds of Hope passed the government exam and are now in secondary education. The Lord is moving mountains in the community, and it’s not just the children who are impacted.

The mothers in the community are often the ones who are incredibly engaged in their children’s education, who show up for the community meetings, who make sure their kids are going to tutoring. As the team got to know the moms who were present, they realized that most of the women were illiterate—they don’t have the opportunity to go to school, so they don’t know how to read or write.

So, the CAMA team decided to start a literacy class for the women in the community. For an hour and a half a week, women show up regularly to learn how to hold a pen, how to trace the alphabet, and how to sign their names for the first time in their lives. At first, the team thought only five or six women would be engaged with the class, but over 20 attend regularly.

“I think that speaks to the level of trust they have for us, the level of their engagement,” says Becky. “It’s been a beautiful partnership with our CAMA colleagues, with our local Senegalese church, and with our Alliance World Fellowship family.”

The literacy program brings a sense of dignity to these women. Not only can they learn to write their names on documents without help, but they also learn that they are valued in the community and valued by God.

“Part of the dignity piece is seeing God’s Kingdom established here and now in something as simple as being able to write your name,” says Shawn.

God’s Hand in Our Purpose

When they finished the nutrition program in the community, the team thought that their engagement with the settlements might have been over, but then the education program began, and they have continued to be a constant presence.

“It’s a privilege to be able to be invited into their lives and in their communities,” says Becky. “We don’t know the end of their story. God knows the end. We believe that we’ve been placed in that community for a purpose, that this is God’s plan for our team in this season of ministry.”

Often, meeting people where they’re at is easier said than done. It’s much simpler to claim your support and love for others, even with good intentions, than it is to sit with them in their brokenness and be present through the toughest trials. More often than not, we love to rejoice with others and forget about mourning with them.

Sometimes, the Lord is calling us to sit, learn, listen, and be present among His people who find themselves in circumstances that we could have never imagined. It is then that we find our relationship with the Lord growing deeper, and it becomes easier to mourn with others when we recognize God’s hand in our mourning.

Showing the love of Christ sometimes means rejoicing with others as they rejoice or mourning when others mourn, and sometimes it’s listening and just being present, trusting that in His timing God will open the doors to the communities He so desperately loves.

“The idea of seeing people transformed and communities flourishing is what we’re about,” says Shawn. “Sometimes it’s through a program like the education program or even a medical program, but sometimes it’s just sitting there and being present.”

Watch the video for this story here.

May 24 is National Great Commission Day!

When you give to the Great Commission Day Offering, you ensure that Alliance workers continue to have a meaningful, impactful presence among least-reached and overlooked people—and that more workers are sent to join them.

When you give on National Great Commission Day, May 24, your gift and impact could be doubled, up to $200,000! Click here to give and learn more.