The Gift of Hospitality

Creating community for the lonely 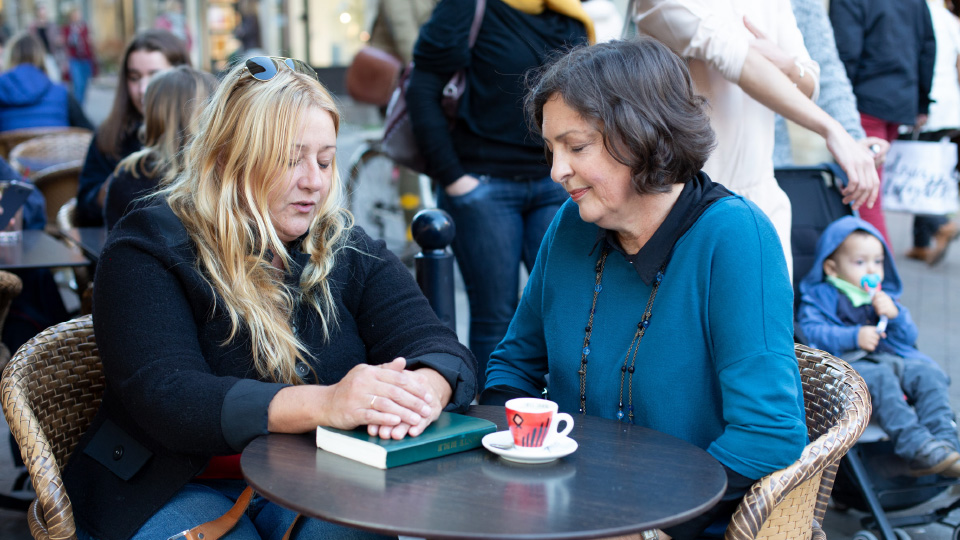 When we talk about bringing gospel access to the world, the image that often comes to mind is serving people groups who have had no opportunity to hear of Jesus tucked away in jungles or living under oppressive regimes. What we sometimes fail to remember are the cultures that have heard of Jesus but have been so deeply wounded by the corruption of the church that they have rejected God.

Not only are the locals in these countries in desperate need of a true expression of Jesus’ love for them, but the nations are coming to them in droves. Millions of refugees and immigrants from Africa, Asia, Russia, and the Middle East have flocked to countries in Europe in the last 5–10 years to escape war and poverty. There is tremendous opportunity for our workers to reach the whole world while living in one place.

This is the culture that Dan and Lisa Lawrence stepped into when they began their ministry in Paris, France. Wanting to reach both French and international people with the love of Christ, the Lawrences decided to take a simple approach—hospitality.

“When I read the Scriptures, the table is present all the way through,” Dan says. “That’s where Jesus’ ministry so often was. If we can get people to join us at the table, the love of Christ will be palpable.”

Dan and Lisa’s ministry is all about hospitality— meeting people organically at parks, their kids’ school, or through a friend. They often visit the same grocery store, flower shop, café, or bakery in an effort to build meaningful relationships with people in their everyday lives. In their first five years, Dan and Lisa have been able to bring hope, love, and community to people who have never experienced it before.

A Vacancy of God

For French people and Europeans in general, the subjects of God and church are difficult, which means inviting them into relationship instead of to a church service is far more impactful. For hundreds of years, France was run by monarchs who were required to be Catholic. “When governments and the church align themselves, it rarely turns out well,” Dan says. “In the French Revolution, they were revolting against power. And because the church was so closely tied with the monarchs, they became one in the same. The French people didn’t want anyone to be king over them anymore, including God.”

Because of the brutality of their kings, who claimed to follow Christ, the concept of the loving benevolent King remains hard for many French people to grasp. Though their churches are empty, French people are flocking to other forms of spirituality in order to fill the void. There are more licensed spiritual healers than licensed pastors, and crystal shops are filled to overflowing, including the one below the floorboards of the Lawrences’ apartment.

“It’s just a vacancy of God,” Dan says. “They’ve been so anti-God that they believe something else has to be the answer.”

Many are also desperate for relationship. Suicide rates in France have always been high, and they were worsened by the pandemic. There is a deep need for true connection and love in Paris, which is why Dan and Lisa are committed to creating meaningful community for all the people they meet. “People often must first encounter the people of God before they can encounter the Person of God,” Dan says.

When they first moved to Paris, Lisa decided to go to the park to let her toddler get out his energy on the playground while she rested on a bench. A couple sat beside her when her son came up and spoke to her in English. The man turned to Lisa and asked in French, “Are you an American?”

“Yes, I am,” Lisa replied, a little startled because she wasn’t sure if that was a good thing.

“I’ve never met an American before,” he said. “I’m so excited to meet you!”

The man and woman, Sebastian* and Evelyne,* started peppering her with questions about the United States, and when they needed to leave, Lisa and Evelyne exchanged phone numbers. In the days to come, they all met at a café, and Sebastian and Evelyne met Dan for the first time. They spent four hours together that day.

“God just kept opening doors for us to meet with them,” Dan says. “We’d see them almost every week at the park or a café or our house.”

“No one has ever asked us that question before,” Evelyne said. “I don’t know what to say.” She started to say that she was thankful for Dan and Lisa, but before she could, she started to weep.

“We entered a place in their lives that few had entered, into a soul care realm,” Dan says. “From that moment, they started introducing us to people as their best friends.”

Their relationship continued to deepen, to the point that Dan was Sebastian’s best man when he and Evelyne got married. When Dan was helping Sebastian clean up after the wedding, Sebastian looked at him and said, “Thank you, Dan.”

“No problem,” Dan said. “That’s what friends are for. We’re happy to help.”

“This is why we do what we do,” Dan says. “It’s the presence of the Holy Spirit in us that he is experiencing. As we strive to have an impactful presence in the lives of the lost, God is opening doors. Our hope is that our hospitality ministry will allow strangers to become neighbors and neighbors to become the family of God. Sebastian and Evelyne aren’t quite in the family of God yet, but they are family.”

Along with the relationships they’ve made with French locals, Dan and Lisa have developed friendships with people from all over the world. Paris is an international city, serving millions of tourists every year and accepting thousands of immigrants. Immigrants make up about 10 percent of France’s population, mainly from Africa and the Middle East. “You go on the metro, and you’ll hear 10 different languages being spoken at the same time,” Lisa says.

Many of the friends Dan and Lisa have made are immigrants, like Carlotta* and Ashraf.* Lisa met Carlotta, an Italian immigrant, while at a birthday party. Because they were both foreigners, they connected quickly and started going to coffee and out for walks. When Carlotta asked what Lisa does for a living Carlotta quickly shut down the conversation, saying, “I’m an atheist; don’t you dare talk to me about God.”

However, they continued to get together, and Carlotta started to bring her partner, Ashraf, an African immigrant, over to Dan and Lisa’s. They kept up their friendship for two years, when Carlotta messaged Lisa, saying, “I really need to talk to you.” They met for coffee, and she said, “It’s been bothering me, but I need to know why you are one of the only people who loves Ashraf and me for who we are. You don’t treat us differently because I’m white and he’s black. You care about us. Why? Why are you different?”

Lisa responded, saying, “Because God loves you. God loves everyone. He doesn’t care about your color. He has unconditional love, and we love you with His love.”

“When we build relationships, we build bridges that can withstand the weight of the gospel,” Lisa says.

Sometimes the people Dan and Lisa meet are in the middle of a crisis. When Dan met Karim* at a community center, Karim was struggling with deep loneliness. “Karim is probably the loneliest person I’ve ever met,” Dan says.

Karim had moved from the Middle East to France for a woman. They got married and had a son, and several years later she walked out on him and took their son with her. “Karim became a citizen, so now he’s trapped in France,” Dan says. “He doesn’t get to see his son, and it’s really hard on him. He has no one in a foreign land with a language he doesn’t fully understand.”

Karim and Dan bonded over sports, and Dan invited Karim and another man from the community center to their house one Sunday night so he could teach them about football. Lisa cooked them dinner, and it went so well that soon they were hosting Sunday night football weekly at their apartment for a dozen to two dozen people. Karim never missed a game.

Their friendship continued to deepen, and one day, Dan and Karim went to a concert where the man had written music for the Psalms of Ascent. At the end of the concert, Karim asked, “Daniel, could you explain to me the difference between Judaism and Christianity?”

“The difference is Jesus—the Messiah,” Dan said. Karim had many questions because it was the first time he had heard any of this. “To be in that moment with somebody when they’re hearing about the gospel for the first time is a powerful, sacred place,” Dan says.

Before they left on home assignment, Karim helped Dan and Lisa move out of their apartment, and he said, “I want to tell you something. In my culture, we don’t ever say this unless we really mean it—and I really mean it. I love you. You are my family.”

Because of Dan and Lisa’s presence in this place, people who have been lonely, hopeless, and in need of community are experiencing the hope and love of Jesus. “We have had thousands of conversations, and they’re all Spirit-filled,” Dan says. “When we’re able to give people the gift of hospitality, God opens doors.”