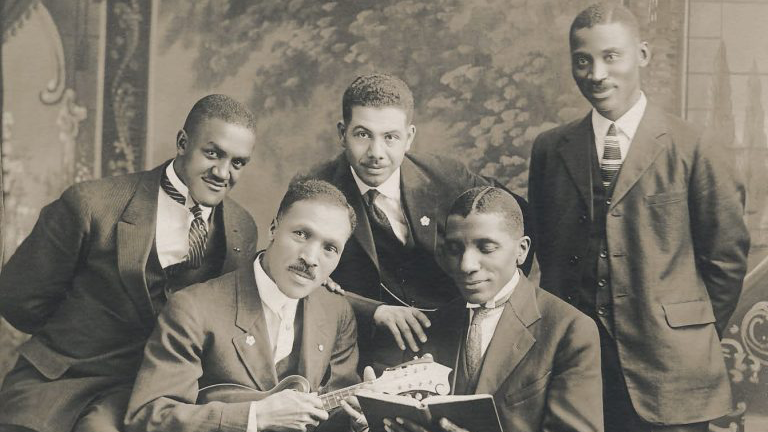 Representing the finest in gospel music, the members of the Cleveland Gospel Quintet were, in their own words, brought by God “in a mysterious way from different parts of the U.S.A. to Cleveland, Ohio, where they were saved one by one through the efforts of The Christian and Missionary Alliance.”

They began singing as a quartet in 1913. Needing another tenor, they prayed for the salvation of Floyd H. Lacy, who was then singing with the popular Musical Magpies. God answered. Lacy joined, and the group became a quintet.

The quintet began singing first in its “Jerusalem,” the Alliance Branch in Cleveland, and gradually extended its radius of ministry for weekend concerts. Soon, they were invited by Paul Rader and the Bosworth Brothers to sing at large evangelistic campaigns in Pittsburgh, Toledo, Chicago, and elsewhere.

It was in Toronto, during a campaign with noted African-American evangelist Dr. Charles Morris, that all five decided to give up their jobs and go into full-time ministry.

Heroic sacrifice was involved in their decision. Back home were five families to support. Free-will offerings would be shared with an evangelist, which for them meant “crumbs from the Master’s table.” They continued with Dr. Morris, ministering to huge crowds in Western Canadian cities.

The Winnipeg Tribune reported “a great moving of God” in that city. Later, in Toronto, the quintet joined Rev. Edward Burgess, the C&MA’s gifted African-American evangelist. The size and spirit of those campaigns had a notable impact on The Alliance.

Campaigns in England, Ireland, Scotland, Wales, the Scandinavian nations, and Latvia followed. Tours running as long as nine months drew immense crowds everywhere, turning hundreds to the Lord and even bringing the quintet before European royalty.

In 1937, the quintet celebrated its Silver Jubilee. All members gave testimony to their wives’ unconditional support. Looking back, J. W. Parker philosophized, “What does a little sacrifice matter when we witnessed hundreds of souls born into the Kingdom of God, each worth more than the entire material universe in His sight?”

Listen to music from the Cleveland Gospel Quintet: