Using God’s resources to raise up and send out 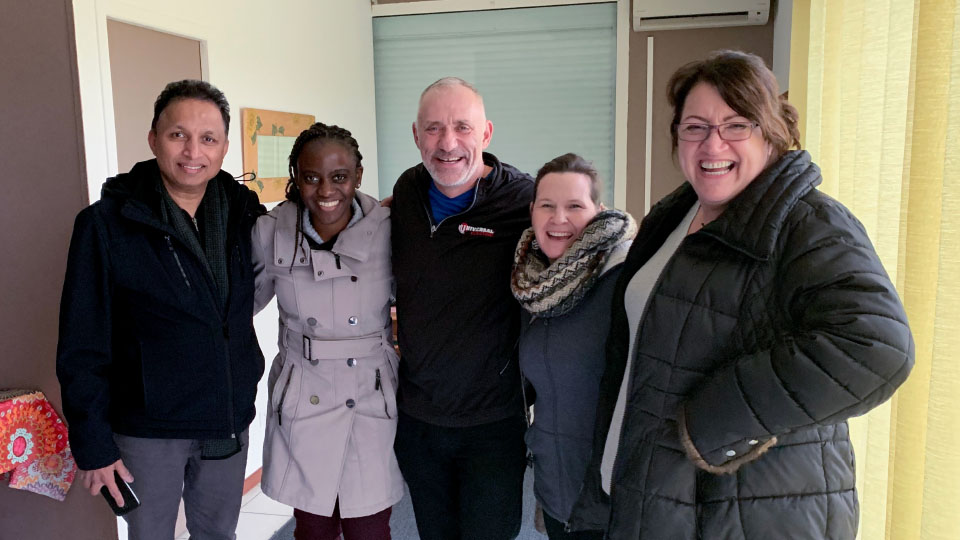 In Manahawkin, New Jersey, as a young couple during the early 90s, Bob and Valerie Nash stumbled into an Alliance church plant called King of Kings Community Church. Bob had been struggling with alcohol addiction, and though they weren’t married, Valerie was pregnant with their firstborn. However, this little church of 15 people walked beside them in deep discipleship, offering them the forgiveness and love of Jesus.

“Only God could write this story,” Valerie says. “I’m so grateful for the women who came alongside me, loved me, forgave me, and showed me how to be a wife and mother. What the enemy intended for evil in my life, God transformed and used for good.”

Soon after Bob and Valerie accepted Christ and got married, Bob attended an Alliance church-planting conference run by Alliance Church Planting Director Bill Malick. During one of the sessions, Bob felt the call on his life to start planting churches: “I didn’t really know what church planting was, but I knew it was what I was going to do.”

Bob and Valerie planted multiple churches out of King of Kings for a few years before the Alliance Metro District asked them to help revitalize a church in the middle of nowhere called Building on the Rock, which had dwindled to 13 people. “We were busting out of the seams right off the bat,” Bob says. “We were baptizing people, and we started to raise up and send out.”

For 15 years, Bob and Valerie served as Building on the Rock’s lead pastoral couple, ministering to their community and sending out church planters, lay leaders, and international workers to build new churches and ministries across New Jersey to other parts of the world. “We don’t hold back our people,” Valerie says. “We just say, ‘You’re the best man or woman of God to do this. Go!’ It’s death, and the church hurts, but the empty seat quickly gets filled with the next disciple.”

While Bob and Valerie were planting churches, revitalizing Building on the Rock, and raising up leaders, King of Kings was growing exponentially. Its congregation was 700 at its largest. According to Bob, it was practically a megachurch because most churches in their area have fewer than 100 people on any given Sunday.

Unfortunately, when Hurricane Sandy hit in 2013, King of Kings came on hard times and their membership started to decrease rapidly. After four years and multiple church splits, the Metro District asked Bob and Valerie to return and do revitalization work at this church.

The Nashes’ first Sunday back was eye opening. It was almost Christmastime when Bob and Valerie came to visit, so there were 11 Christmas trees set up in the sanctuary and projectors saying, “It’s Christmas! Rejoice and be glad!” Meanwhile, the parking lot was full of garbage, the gymnasium was full of boxes of donations from Hurricane Sandy that no one was coming to collect, the heating system was broken, there were 30 leaks in the roof, and the church owed $30,000 for their mortgage by the end of the month.

“When we got there that day, I was convinced by the end of it we weren’t coming back,” Bob says. “There were only 27 people in a 28,000 square-foot building with a $2 million mortgage and only $400 in their checking account. I thought, There’s no way.”

As Bob was walking out of the church, an older man, Jim, thanked him for coming. While they were talking, Jim’s granddaughter, a cute little girl about 10 years old with ponytails and freckles, came out to join her grandfather. She was the only child left in the church. “This is Kallie,” Jim said. Kallie’s dad had passed away when she was six years old. Her mother turned to drugs soon after and was in and out of jail for years, causing Kallie to live with no stability.

“I went home that night and could not put Kallie out of my head,” Bob says. “I said to Valerie, ‘If it’s for Kallie, we’re going down there.'”

Forgiveness and a Funeral

Bob and Valerie both felt strongly that this was God’s next step for them, and when they brought it before Building on the Rock, the whole congregation decided to pitch in too. King of Kings was an hour away, but members of Building on the Rock chose to come and help, giving of their time, money, and labor to bring this church back to life.

Starting this new life meant dying to their current ways of operating. Bob decided to hold a funeral for the church, where they locked the doors to the sanctuary and buried the sign that said, “King of Kings.” They even gave it a new name: Main Street Alliance. “The church forgot its purpose,” Bob says. “It had some of the most miraculous testimonies you’d hear anywhere. But somewhere along the line, they had forgotten that the work is to make disciples and watch them get revived and come alive. King of Kings just became a club to belong to.”

Because of the hurt that had been caused, Bob and Valerie started meeting with the 25 church members who were still left in a small room in the church to write letters of repentance to the community, sending out 3,000 in total. These letters resulted in many people coming back to share their hurt and receive healing for the damage that had been done.

One of the groups the church had to repent to was Renacer, then Hispanic church that met in their building. King of Kings had been housing Renacer, but they did not want anyone to know that a Spanish church was meeting in their building. Members of Renacer had to come in through a back door to perform their services on Sunday evenings. Bob didn’t know about them, so when he locked the doors to the sanctuary, he accidentally shut down Renacer too.

“I had no idea I had hurt them so badly,” Bob says. “They felt like they were the embarrassing stepbrother no one wanted to talk about. They didn’t have a voice at the table. We went through the journey of repentance together, and today, we are working together and loving each other well.”

The members of Main Street Alliance were also bitter about the decline of King of Kings and were pointing blame at the leadership. One of those members was Kallie’s grandma, Nancy. As she began to complain to Bob, he stopped her and said, “Would you please forgive me?”
“Forgive you?” Nancy asked. “You didn’t do it.”
“Yes, I did,” Bob said. “This is my family. I’m sorry. Will you forgive me?”
Nancy started to cry, gave Bob a hug, and said, “I forgive you.”

Later on, a woman named Naomi who used to attend the church came to visit and was complaining about all of the same things. Before Bob could say anything, Nancy asked Naomi, “Will you forgive me? This is my church. I let this happen.” Naomi cried and forgave her. Now both women are integral parts of the church.

“It became two or three months of the most beautiful times we ever had seeing God heal hearts,” Bob says. “The first year was just about learning what God says the Church is supposed to be, which is His beautiful Bride on display for the world to see.”

New Life for All

In the midst of repentance and mourning, Main Street Alliance was imagining how its huge building could be used for the community. With its many classrooms and large gymnasium, they decided the building would be best used as a community center. They now host everything from Alcoholics Anonymous and basketball teams to after school programs, music lessons, and cooking classes. Main Street Alliance even held a nine-week long summer camp for the kids in their community to show them and their families the love of Christ.

More than 1,000 people come through Main Street Alliance’s building every week from many different racial, cultural, and religious backgrounds. And they’re baptizing new believers all the time!

Because of these programs meant to care for the community, Bob estimates that 90 percent of the people coming through Main Street Alliance’s doors are nonbelievers or brand new to the faith. And God is doing miraculous things in the hearts of those who come. Drug addicts and prostitutes have become pastors and church leaders. Veterans have been healed of there trauma from war and found peace with Christ. At-risk teens are being fed and cared for, keeping them off the streets and leading them into the love of Jesus.

“If I’m going to boast about something, I would boast in how Jesus has taken so many broken people with some of the craziest stories and transformed them,” Bob says. “Only He can do that.”

In order to continue planting more and more churches, Bob and Valerie have helped start a collaborative group of churches in South Jersey to share resources as they plant churches together all over their area. In 2021, five churches raised $80,000 to send out their next planter. The collaborative meets once a month to pray together and train the new planters and their teams.

“We believe we can do way more together than alone,” Valerie says. “And we’re just scratching the surface of seeing God raise up this generation of leaders to carry on the torch.”

Bob and Valerie’s main focus over the years has been to raise up men and women for whatever God calls them to—from church planting to missions work and anything in between. Since their time at Building on the Rock, they’ve had a “war-room” with about a thousand Post-it notes covering the walls with the names of people they are praying over and raising up. And many of them have become pastors, international workers, and church leaders.

In its first year, Main Street Alliance became a host site for The Empower Program, an Alliance ministry designed to prepare women for effective ministry with biblical and theological training that is supported by the Metro District and Alliance Theological Seminary. Valerie went through the program herself and became deeply involved with it from then on.

“The Empower Program helped get our women to step into the more that Jesus had for them,” Valerie says. Over 850 women have graduated from the 15 sites in the United States and one international site overseas. “They’re equipped to go wherever you need them,” she continues. “From hospital visits to overseas work, these women are equipped for Spirit-led ministry and Kingdom work.”

Right now, more than 12 men and women from Main Street Alliance and their daughter churches are also enrolled in the Alliance Leadership Development Center, a two-year program for lay leaders and pastors to receive spiritual formation and biblical theology training while learning how to be licensed workers with the C&MA. Soon they will also be sent out to different churches and ministries to further the gospel as the Lord leads.

“Never in a million years would I have dreamed this was the journey He would have us on, but I wouldn’t trade it for anything,” Bob says. “There are challenges, but our Father owns all the cattle on a thousand hills. All of His grace is available to us, and we are rich beyond measure.”