During a camp fire that destroyed over 160 homes, God was present and continues to provide. 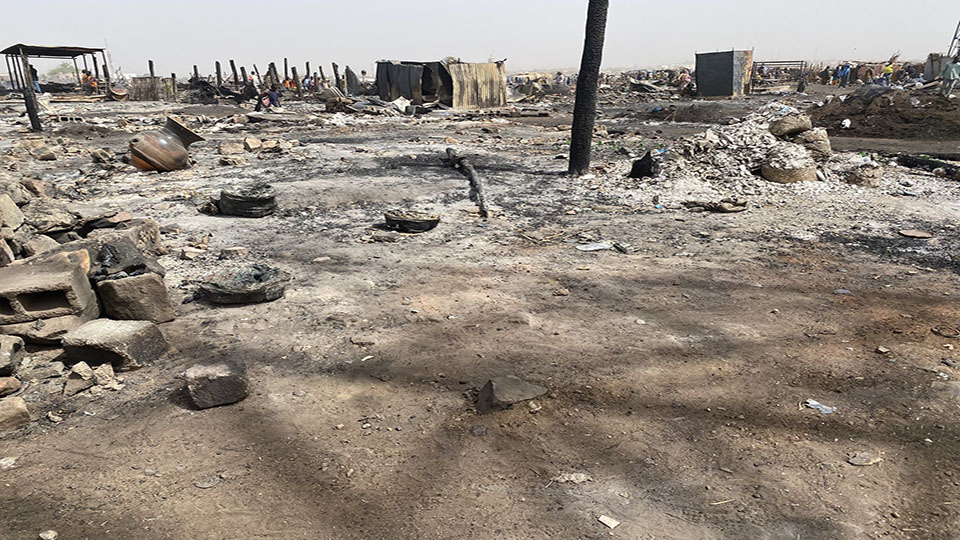 by an international worker serving in West Africa

Once again, the camp has burned. This time it’s about one-third of the camp that’s been destroyed. The camp currently has almost 4,000 people living in it. They live on one of the city dumps on a hill where the wind blows incessantly, which makes fire danger a constant worry. There is broken glass everywhere you look, and the majority of the children are running around without shoes. The smell of trash and feces is terrible, especially on a hot day.

There was a huge fire that destroyed much of the camp a couple of years ago as well. This latest fire is the second this year—the first was in an area that I don’t work in, and it destroyed about thirty houses. Both of the fires this year are said to have started due to sparks from cooking over an open fire. The houses are made of dried grasses and plastic bags—they are the perfect kindling.

Thankfully, no lives were lost, though many people told me that they had only what they were wearing.

One amazing thing that stands out to me is that the homes of the handful of families who have given their lives to Christ remain untouched. The clinic and water tower remain standing. The very fact that the water tower was repaired last week allowed people to get the fire under control sooner.

Just days before the camp burned, we were able to install more solar panels onto the water tower. For months leading up to the fire, the water would be gone by 4 p.m., and due to low solar energy, the tower would not refill until the next morning around 10 a.m. The tower only partially filled twice a day. There wasn’t really even enough for everyday life. If the fire had started then, it would have been really bad. Thankfully, the new solar installation allowed the tower to fill continually during the day, so it was nearly full when the fire started.

They were able to use the water to wet the ground and slow the fire down. It was so hot that people could feel it one-fourth of a mile away, and it melted a high-tension power line. That water saved our clinic and the houses that the mission was able to help build after last year’s fire.

The interesting thing is, the fire burned in ways that don’t even make sense. It burned against the persistent wind. It burned around the water tower in a ring leaving it largely undamaged with dry and brittle plants not even left scorched. There was not one house left standing anywhere near the tower. In other places as well, it burned itself around structures that were surely flammable leaving them unscathed.

There are only a handful of Christians in the camp. Almost all of them have come to know Christ after their arrival here. Some had never heard about Jesus in a gospel presentation (meaning that they have only heard of Him as a prophet in their teaching). Some of these new believers have been baptized and are now learning what it means to become a disciple. The fire raged toward their homes. For one family, the fire stopped six or seven houses away, though some of their non-believing family members lost their homes. Another family only had one house between them and the fire. An IW from another mission told me that one family had fires on both sides of their house, but it went around them. I did not personally see this, but believe that it is possible.

One thing I am confident of is that none of this takes God by surprise. Pray that He continues to open doors for the gospel.

At final count, it looks like 165 or so families lost their homes in the fire. Much of my time has been spent sitting with people as I listen to their stories. During one of those occasions, I looked down and in front of me was dried grass that had fallen to the ground in the shape of a cross. It was a poignant reminder to me of just how rich the little that I could bring at the moment was. I had nothing to give at the time, and to be honest, they were still reeling.

As the week went by, I’d been in contact with a few people in the community. One person said, “It’s difficult to go out there with empty hands, so I haven’t been able to go.” Oh, how this makes sense, yet with Christ, our hands are never empty. As we live the testimony of Christ and hear IDPs themselves speak of answered prayers, I realize that the light of the gospel is beginning to pierce through the darkness. We may not see all of the results this week or even this month, but His light is being seen. We could go to those in need with our hands full but leave them with empty hearts. Of what value is that? God, help us to give what’s most important as we also seek to show the compassion and generosity of our Lord.

Pray that God will continue to clearly magnify His name in the camp. One of our workers who avoids talking about Christ has openly told several people that God answered prayers that day. He has been more open to talk than I have ever seen before.

Pray that as we respond to the physical needs more, doors will open for the gospel.

Pray for someone to answer the call to join us.