Stories of difference-makers like you are being shared by CAMA. 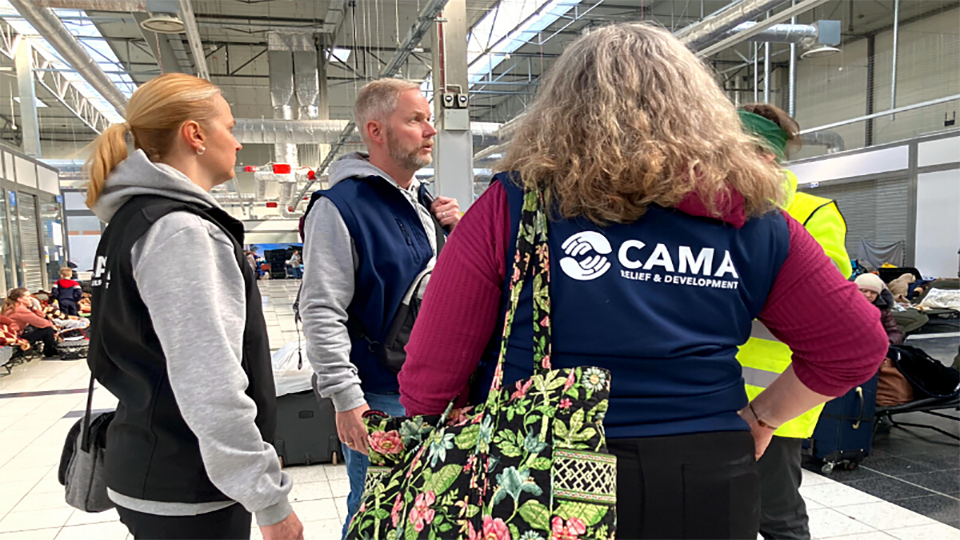 On the morning of February 24, 2022, Ukraine was invaded via air, land, and sea by Russian forces. Conflict ensued, and over a month later, around 6.5 million people have become internally displaced, over 4 million Ukrainians have fled the country, and over 1,000 civilians have died. For the past five weeks, CAMA Services has been working to respond to the needs of the Ukrainian people. We asked you to join us prayerfully and financially. You responded, and to date you’ve given over $800,000 in donations to CAMA.

Making a Difference in Others’ Lives

Because of your generosity, nearly $62,500 has already been distributed to those in need, and more funds are currently being designated to go out. Thanks to you, those evacuating Ukraine were better able to afford food, lodging, and travel. Thanks to you, our local partners have been able to assist refugees, help the internally displaced, come alongside Ukrainians remaining in Kyiv, and distribute much-needed aid to all. Thanks to you, CAMA was able to commit an initial $10,000 to The Alliance Canada this past week as they began building children’s centers in Poland and along the Polish-Ukrainian border. As refugees arrive in Poland, these centers will provide hundreds of children a safe, stable place to rest, to be a child, and to play before their families move on to a more permanent location. These efforts and partnerships have been made possible only because of your overwhelming demonstration of support.

Danya, a Ukrainian foreign exchange student in Hawley, Minnesota, is one of the many of you whose hearts and hands have been moved to support the people of Ukraine. Danya arrived in the United States in late August of 2021 and began attending services at Hawley Alliance Church with her host family. Danya is from Mariupol, Ukraine, and has been worried for her city as the conflict has been cutting civilians off from food, water, power, and from consistently communicating with the outside world.

Wanting to do something to help her family at home, Danya began fundraising for CAMA’s Ukraine-Russia Conflict Response. She started by tabling with a donation box at her church to raise both awareness and funds. With the help of her host mom, Danya’s efforts then expanded into the creation of a Facebook page. Help for Mariupol, Ukraine went live at the beginning of March and now has over 270 followers. With the help of this page, Danya has been able to sell candles, soaps, t-shirts, bracelets, and handmade art. In just two and half weeks, she raised over $10,000 all in support of Ukraine.

Continuing to Reach, Partner, and Pray

Once again, we want to say THANK YOU for your overwhelming support, for moving and praying, and for trusting us with this profound expression of your deep compassion for the people of Ukraine. As we look for further ways to steward your generosity, would you continue to partner with us for the next month by specifically taking the time each day to pray for Ukraine, its people, and their many needs?

One of our local partners told the CAMA staff, “There are hard times with tears, but we are serving people with joy.”
May we continue to press on with such perseverance and in prayer.