CAMA: Extending Christ’s Compassion to Those in Need

Because of the Alliance’s generosity, CAMA was able to grant over $200,000 to help thousands of people in 2021. 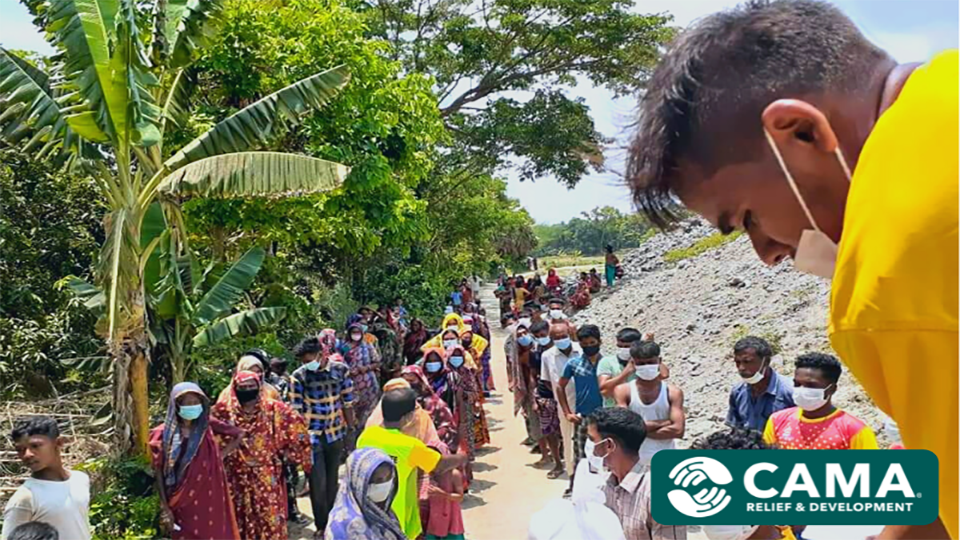 Here are just a few stories about where we were able to come alongside others in their time of need:

This past year, CAMA provided $162,000 in relief aid to three countries in South Asia. According to the Joshua Project, these locations are among the top five countries in the world with the most unreached people groups. CAMA collaborated with partners from South Asia, Hong Kong, Canada, the Chinese Churches Association, the Metro District, and more to provide aid and gospel access to those among the least-reached.

Local churches that were able to reach out to neighbors in need distributed COVID-19 relief in many forms. Volunteers organized and distributed food packets to day laborers, the marginalized, and the blind. Hot meals were made for the homeless. Others who were stretched financially received a small cash stipend to help with food, necessities, and medical bills. In one city, CAMA partnered with local Christian medical professionals to set up a field hospital to address the overflow of patients from nearby hospitals. In another location, CAMA provided O2 concentrators and nebulizers. In yet another country, CAMA partnered to help set up the first and only isolation center for the disabled. Through relief efforts, a door opened via a local church for staff to share an online gospel presentation to over 53 families.

These practical expressions of love to those in need created opportunities for local pastors and believers to establish relationships for sharing the eternal hope found in Jesus.

Burkina Faso has been hit hard by repeated terrorist attacks in recent years. Over 30 violent and deadly attacks have caused over 1,00,000 people to become displaced. Unfortunately, C&MA churches throughout the country have also been affected by these disturbances. Several churches have closed as 50 pastors have had to flee from these majority religion terrorist attacks.

ACCEDES, the relief and development arm of the national church in Burkina Faso, has been serving displaced people for years and decided to assist these pastors with a seminar focused on healing from trauma. Topics such as suffering, mourning, lamenting, living as Christians while experiencing conflict, preparing for crisis, and God’s love were all covered. CAMA has been partnering with ACCEDES in their ministry towards IDPs and helped to provide funding for this training as well as for clothing, grain, and rice.

These pastors not only received physical assistance, but spiritual aid as they were given the space to converse with others, to pray, and to begin healing from the wounds they had experienced in having to leave behind their homes and communities.

COVID-19 has significantly affected how schooling is done throughout the world. In locations where online options are minimal, it has been hard on students and their families to continue their education.

In the Asia-Pacific region, a program funded by your financial partnership called Smart Spaces addressed this critical need. The program provided spaces for teachers to bring up to 10 students together to be tutored and to socialize with one another. Some locations even offered extra resources. One space made a “creative class” available for children to engage in singing, dancing, public speaking, writing, as well as arts and crafts.

Your contributions towards CAMA relief efforts not only gave students the chance to continue their schooling, but to be creative and productive while experiencing love and concern from Christian teachers.