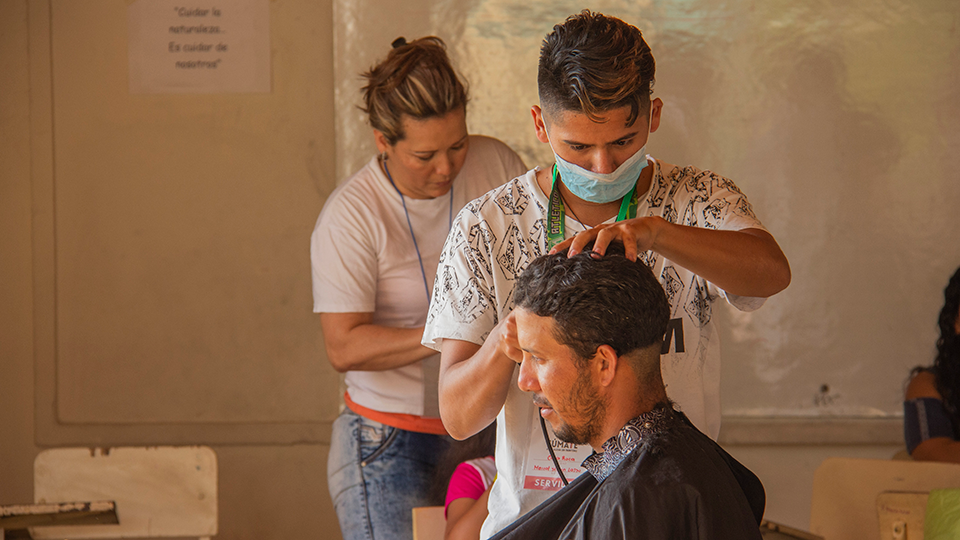 by Thom McMurray, a CAMA worker serving with The Alliance in Colombia

In 2018, I was doing accounting work for CAMA at the National Office. I had been urging CAMA’s director, who was my boss, to start engaging with relief and development in Latin America because of the many opportunities there. I had no intention of being involved myself.

Then I got a phone call from the Colombia Alliance about the influx of Venezuelan refugees—at that point, it was about a million. Today, over 4 million Venezuelans have left their country; about half are living in Colombia. When I met with church leaders there, they said, “We want to help. We don’t have any resources. What can we do?” I asked, “Do you have doctors in your church?” They said, “Yeah.”

“Do you have barbers?” I asked. The answer was yes. I continued this line of questioning, listening to their responses, and said, “You’ve got resources. Let’s leverage them.” It was transformational to the Colombia Alliance to realize it didn’t require a lot of money to help Venezuelan refugees.

Answering that phone call led to more opportunities for me to engage with CAMA in relief work in Latin America. As we kept finding new ways to partner with and develop Latino churches through relief and community development, I asked my boss, “What does this mean?” He said, “I guess we have a new region, and you get to develop it.”

Because of CAMA’s presence, we were able to walk with the national church network in Colombia through two devastating floods. In one city, the government had built a levee 10 years earlier because crops were being annually destroyed by floods. This past year, a hurricane combined with seasonal rain overwhelmed the levee. The entire village was underwater—everything was destroyed.

CAMA was able to respond immediately with short-term aid and set up a project to encourage the local families to rebuild the levee themselves, agreeing to partner with them on a long-term recovery. Through this, they realized that they won’t have to wait on the government to fix it the next time it breaks. Also, one of our friends who runs a fertilizer company donated his fertilizer and two of his employees to help the villagers replant their crops. As a result, 50 people came to Christ!

Continue to intercede for the Alliance national church network in South America. It’s full of strong, mature congregations, but they’re relatively “young” when it comes to sending international workers. Pray that this emerging group of missionaries will go out equipped to bring All of Jesus to All the World and lean into holistic ministries, including relief and development training, as they serve.

Completing the Great Commission often feels like a burden placed upon the North American church, but the reality is that there are many places that North Americans cannot or will not go. However, by working with the local resources, talents, and people that God in His infinite wisdom has already placed throughout our world, together we will complete Christ’s Commission.