Finding healing and forgiveness in the Cross 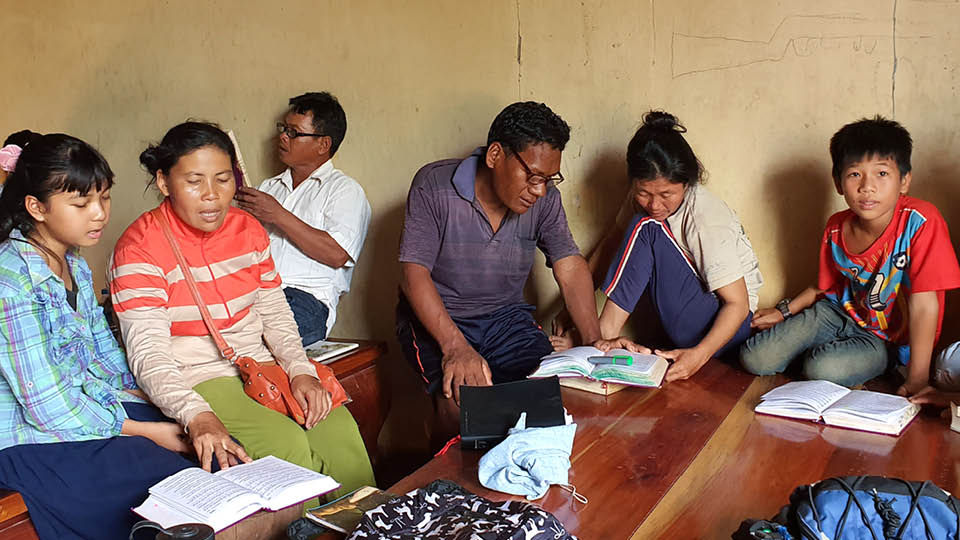 by Syna Lao, an aXcess worker serving with The Alliance in Cambodia

Pheap, 43, is the mother of five children and lives in northern Cambodia. When she was a little girl, her abusive father drank himself to death. Her mother died when Pheap was seven. To survive, she wandered from village to village begging for food from people who took pity on her. Sometimes, she offered to work in exchange for room and board.

At first, these families were kind to Pheap and welcomed her as one of their children. But in time, they made her work like a slave, forcing her to clean, cook, and do laundry all day.

“I did not mind the hard work as long as I had food and a place to stay,” Pheap says. “But as I got older, the male family members would try to rape me at night.” To protect herself, she wore many layers of tight clothing to bed. If someone tried to touch her, she would kick and scream for help.

These nightly routines disrupted Pheap’s sleep. “I was always tired during the day or clumsy with my work. Then, the female members would yell at me or beat me up. When it was too hard to bear, I ran away and tried with another family in a different village.” But the cycle continued, and Pheap became desperate.

Pheap is from a minority community group called the Kuy, who are known for their lifestyle of black magic, witchcraft, and the ability to cast spells. Considered second-class citizens by the Khmer majority, the Kuy live among themselves in remote villages far from public schools and health-care facilities. Many of their children lack education and proper medical care. When they are ill, Kuy people seek village healers or local witch doctors for help—at a price, of course. They believe in spirit beings that reside in natural objects like trees, fields, or hills. Some of these entities are believed to cause illness; others give people special magical powers over their enemies. The Kuy also wear “spirit strings” around their wrists, waist, and neck to ward off evil spirits.

As a child, Pheap had seen these practices among her parents and her people. Shortly after her mother’s death, she became close with an elderly lady who was a healer in her village. To escape her abusers and learn to cast spells on anyone who wronged her, Pheap often visited this woman in secret, carefully observing her rituals. Then Pheap would recite and rehearse the chanting, mimicking the healer’s rites until she became proficient in them.

In time, Pheap encountered several spirit guides who visited her in dreams and whom she sometimes consulted for help. One of them was a fortune-telling guide who would show her future events. This enabled Pheap to earn a small income by “selling” the next winning lottery number to an interested party.

When some men tried to rape her, Pheap cried out to a spiritual guardian for help and received supernatural strength to fend them off. If she knew who tried to harm her repeatedly during the night, she would consult with her guardian to cause him bodily harm.

By the time my husband, Soeuth, and I met Pheap in Anlong Veng, she was married to a man she had eloped with at age 17 to escape her abusers. But the abuse continued while she lived with his family. Pheap says, “I thought maybe this was my lot in life. Perhaps I was not meant to experience love or happiness for the rest of my life.”

Pheap’s husband abandoned her for months at a time to drink and gamble away their savings. He would use their land-deed as collateral for his gambling debts and tell the lenders to collect the money from Pheap. As a result, she lived in constant fear of being kicked out of her house, along with her hungry children.

When we learned of the many hardships she was going through, we were moved with compassion and introduced her to Jesus. “For the first time in my life, I began to feel special, loved, and cherished,” Pheap says. “The more I studied God’s Word with Syna and Soeuth, the more I realized that I was loved by God. They told me God loves me so much that He was willing to trade His life for me!”

Pheap was one of 11 students who studied the Firm Foundation discipleship course with me for nearly two years. Through the chronological Bible studies, Pheap was convicted of her sin and wanted to live a life that would be pleasing to Jesus.

During a Good Friday evening service in April 2021, a group leader from Toul Prich Firm Foundation Alliance Church led the believers in a rich time of singing traditional Khmer hymns, reading Scriptures, and praying. Afterward, participants were instructed to reflect on the descriptions of the suffering Messiah found in Isaiah 53, and everyone was to finish this statement in his or her own words: “Because of what Jesus did on the cross, (today) I . . .”

One woman, Noun, shared about her miraculous healing (click here to see Noun’s story). “Everybody in the village knew that I was sick and dying, that I had no hope for recovery. But because of Jesus, I am healed. I am stronger. I can go about my work every day! My life is a living testimony that Jesus is the one, true, and most powerful God on earth!”

Watching everyone share, Pheap began to cry softly. She seemed to be struggling to find the courage for what she was about to say. Finally, in a trembling voice, she blurted out, “I have something to share with everyone tonight. Before I believed in Jesus three years ago, I was talented in using black magics. I had abilities to cast spells and curses on people, especially those who offended me. And I was good at it—until Jesus came into my life.”

After a long, uncomfortable silence with everyone intensely gazing in her direction, Pheap slowly turned to Noun, who happened to be sitting next to her. “Noun, I was the reason you were sick! I was the one who cast spells on you. I hated your family for buying the house I was saving up for myself.”

She explained that with the owner’s permission, Pheap and her family had been living in a vacant, stilted house with a “For Sale” sign on the property. They earned an income by selling vegetables they grew on the property’s gardens. Without giving Pheap any explanation or advance notice, the owner sold the house to Noun, and Pheap had to find a new place immediately. Infuriated, Pheap made a deadly vow with her spirit guides, saying, “Someone must die.” Pheap continued her story:

When you got sick, I was glad on the inside. But then, you got better! I was shocked by this news! I heard that you met a new God named Preah yea-sue [Jesus]. And you told everyone that it was He who had healed you! I could not believe it. I watched and waited to see if your story was true. And it turned out just as you had said.

Because of this, shortly afterward, I also prayed to receive Jesus as my Savior. Since then, He has proven to me repeatedly that He is the one, true God. After I prayed to accept Jesus, I completely abandoned all the black magic practices. I destroyed and burned all the worship items. But even though I sincerely repented and confessed this sin to Jesus, I never confessed this great sin to anyone else—and especially not to you. And so today, in front of these people, I am asking you, Noun, to please forgive me for the evil things I did to you.

Surprised and bewildered, Noun responded in tears, “I had no idea. And I am not mad at you. Because Preah yea-sue died on the cross for our sins, and because He rose again and is alive and living inside each of us, I love you. I forgive you!”

There was not a dry eye in the house. Everyone who participated in that Good Friday service joined in agreement that, because of what Jesus did, we all live with the assurance of knowing that we have hope, love, and forgiveness in Him.