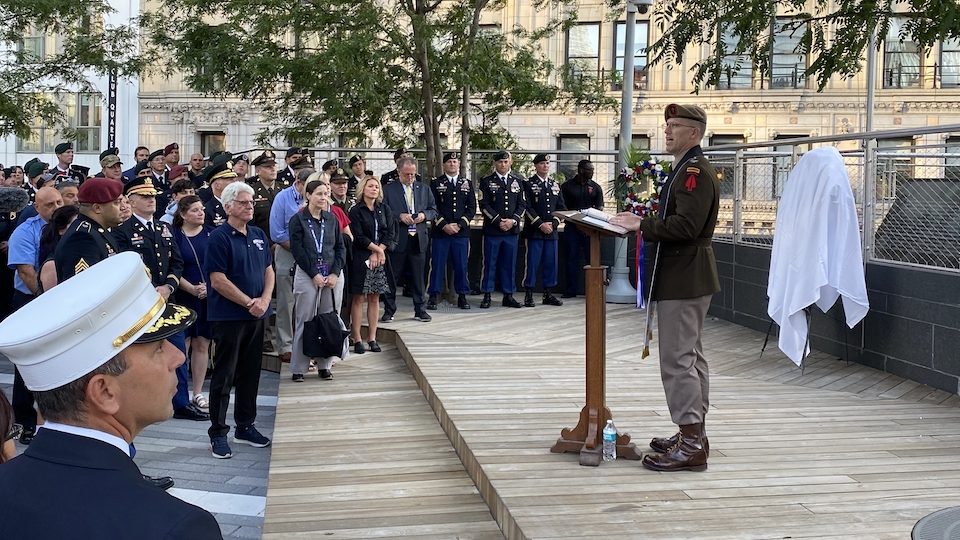 Chaplain (Colonel) Dave Bowlus, an Alliance chaplain, is currently serving as the U.S. Army Special Operations Command Chaplain. Over the 9/11 weekend, Chaplain Bowlus was with the Fire Department of New York City’s (FDNY) Engine Companies helping conduct a ceremony of remembrance at the Horse Soldier Statue. This statue, officially titled America’s Response Monument, is located at Ground Zero and honors Task Force Dagger, which was part of the United States’ initial response to the terrorist attack on 9/11. The task force included a Special Operations team who rode horses into combat against the Taliban in Afghanistan.

America’s Response Monument is a 16-foot bronze sculpture which overlooks the site of the World Trade Center attack and commemorates the little-known story of the first Americans in more than 50 years to ride horses into combat during the winter of 2001-2002 in Afghanistan.

Remarkably, only two members of the Special Operations team had any horse-riding experience. These soldiers spent 30 days in the saddle assisting allied forces, the Northern Alliance, in attacking Taliban militants through some of the most daunting, isolated mountain terrain in the world.

Another Alliance chaplain, Chaplain (Lieutenant Colonel) Erik Gramling, was able to meet up with Chaplain Bowlus to spend a meaningful 9/11 in New York City. Chaplain Gramling decided to become a chaplain because of the impact that the attack on 9/11 had on him, making him consider military chaplaincy as the Lord’s calling for his life’s vocation.

At the ceremony, Chaplain Bowlus led the nearly 150 attendees in prayer and read passages of Scripture to remind them of God’s presence and protection. We are thankful to Dave and Erik for their service, and honor those who have served our nation.